CHRIS ROCK. JAMIE FOXX. STEVE HARVEY. DAVE CHAPPELLE. MO’NIQUE. Some of the biggest names in American entertainment today all appeared at Raymond Lambert’s club All Jokes Aside, the legendary Chicago showcase for African American comedy, at the outset of their careers. This uproarious and insightful memoir grew out of Lambert’s critically acclaimed 2012 Showtime documentary, Phunny Business, and tells the story of his life as seen through the lens of All Jokes Aside—its successes, failures, and lessons learned.

Lambert grew up working-class and became interested in a business career at an early age. By the late 1980s, he was earning a six-figure salary as an investment banker on Wall Street but dreamed of starting his own company. With zero experience, an equally committed partner, and a little borrowed money, he opened All Jokes Aside in Chicago’s Near South Side, and before long he was helping to launch some of the biggest names in comedy. Then he lost it all.

All Jokes Aside is the wildly entertaining story of Lambert’s journey, a behind-thescenes look at the world of show business, and an inspiring tale for any dreamer and would-be entrepreneur. Chock-full of cautionary tales both humorous and dramatic, revealing details on the early careers of top performers, and tangible guidance on how to build a business from the ground up, this book is a much-needed recent history of black entertainment and a powerful memoir of entrepreneurial ups and downs.

With an introduction by Lambert’s mentor CHRIS GARDNER—the author of The Pursuit of Happyness, the memoir that inspired the Will Smith film—All Jokes Aside is funny, astute, and brutally honest.

CHRIS BOURNEA is a journalist, author and documentary filmmaker. He began his career at Ohio’s historic African American newspaper, the Call and Post, and has covered a wide range of stories, from President Barack Obama’s historic 2008 election to interviews with numerous best-selling authors. 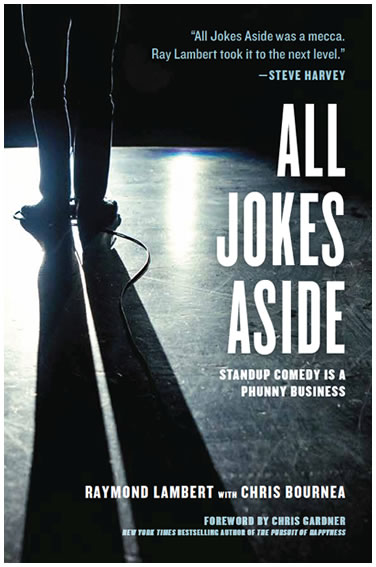